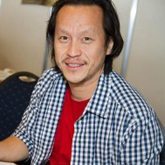 From very humble beginnings as a self-taught illustrator, Keu Cha has achieved recognition as a versatile artist skilled in sketching, art directing, concept design, and digital and 3D illustration. Keu started drawing at a very young age, influenced by comic book and fantasy artists such as Marc Silvestri, Jim Lee, Todd Mcfarlane, Boris Vallejo and Frank Frazzetta. With almost no formal art training except for the encouragement of one caring art instructor, Keu bypassed art school for a job in comic books, honing his skills as a penciller on such titles as Rising Stars, Witchblade, Tomb Raider and Darkness for Top Cow Productions.

In his return to comics, Keu will pencil two issues of Magdalena for Top Cow and simultaneously work on his first creator-owned series, Hex: The Lost Tribe. Hex is the creative culmination of Keu’s artistic journey over the last 15 years.