You are here: Home1 / our family2 / Elias Chatzoudis 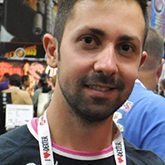 I was born in December, 1982, in Greece or, to be more specific, in Athens. In 2000, I studied web and graphic design at a private educational institution. It was there that I first learned about image processing and design programs. After I completed my military service in 2003, I took classes on how to build web pages using the flash program. I then found a job with a creative advertising agency called Zip Studio where I would work for several years. Working there gave me the opportunity to further develop my skills as an illustrator since I was creating illustrated e-cards everyday. While I was working there, I also collaborated with some Greek, European and American magazines like Free, Maxim, MAX, Ennea, Sporty JR, WOW, GRAFISTAS&WEB DESIGN, Square, Art Scene International and others.

In 2007 Sticker Chick published my first art book “Digital Divas” and two years later my second one “Whoops!The Art of Elias”. Since 2011 I’ve been collaborating as a cover artist with several comic companies like Zenescope Entertainment, State of the Art Entertainment, NAS Studios and more. In 2012 SQP has published my third book “Fever Pitch” with my pinup art. In 2013 is published my second volume of this title “Fever Pitch 2”. I have taken part in some of the most popular comic conventions like New York comic con, San Diego Comic con and London Super Comic con as a guest.