You are here: Home1 / our family2 / Tyler Kirkham 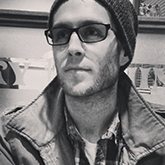 Tyler Kirkham was born and raised it Utah. He grew up loving art, and has always enjoyed drawing. He really found a love for comics in the early 90s when Image Comics came on the scene. At that moment he knew what he wanted to do with his life. After going to countless conventions and sending out lots of samples, his first paid art gig was drawing for a local newspaper. He later landed a job drawing an indy book called “The Gift.”

Fresh out of high school, he worked on The Gift until another opportunity came up. He had been given the chance to move to L.A. to work for Top Cow Studios, where he could work in “the pit” with other artists, one being Marc Silvestri. After living in L.A. for a couple years Tyler and his wife decided to move back to Utah. Tyler has worked on titles such as Strykeforce, Tomb Raider, The Darkness, Transformers, Amazing Spiderman, X-Men Phoenix Warsong, and Ultimate Fantastic 4 to name just a few. His work has been featured on many Web sites and in magazines, like FHM, Wizard, Nintendo Power, and Imagine FX among others. He’s also done video game concept work and some novel and book covers. He’s currently working for DC Comics and also developing his own stories and ideas to get them on the shelves in the near future.